How the world’s biggest emitter could be carbon neutral by 2050. 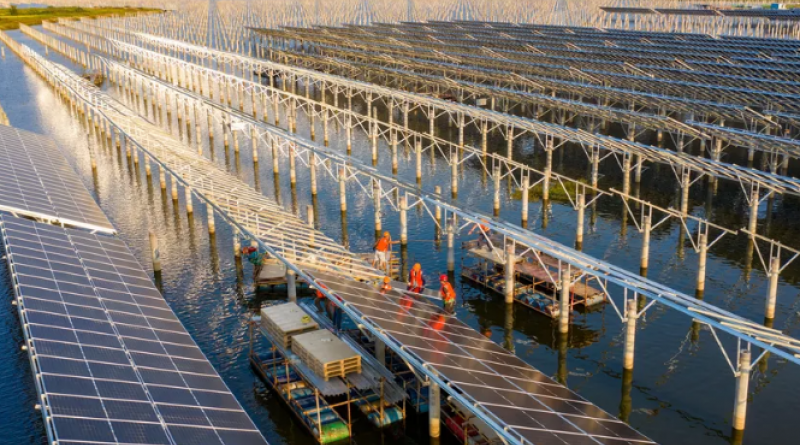 Xi Jinping wants China to get to net-zero emissions. These researchers have a plan for that.

On the virtual stage of the United Nations General Assembly in September, President Xi Jinping made a bold commitment: China — the world’s largest source of greenhouse gas emissions — would strive to become carbon neutral by 2060.

Going carbon neutral means that China would use clean energy sources and capture or offset any remaining emissions. By removing the same amount of carbon it’s emitting into the atmosphere, it would achieve “net-zero” carbon emissions.

But when Xi dropped the news at the UN, he offered few details on how exactly China would totally decarbonize in a matter of decades.

Now, a group of China’s top climate experts has come forward with a plan. In their study, released Monday, they suggest that China should peak its emissions over the next decade and then rapidly decrease them to reach carbon neutrality by 2050. The researchers, who have the ear of China’s leaders, recommended that this path guide the country’s planning.

The recommendations come at a critical time: The country is currently finalizing its next five-year plan, which will steer economic development from March 2021 through 2025. Also, in the next few months, China is expected to join other countries in submitting updated climate goals to the United Nations under the Paris Agreement.

What’s more, the study shows that Xi Jinping’s UN speech was not just talk: Experts are laying the foundation to transform China’s economy and energy system. How that unfolds will have profound consequences for whether the planet limits catastrophic climate change. So here’s a look at how the new roadmap would change China, in the near term and over the coming decades.

This new study isn’t the first time researchers have sketched out a long-term decarbonization path for China, but what’s different this time is who is delivering the message.

Top brass are behind the research, including Xie Zhenhua, one of China’s senior climate officials, who supervised the project. Among the co-authors are researchers from over a dozen of China’s leading think tanks and research institutes, many of which are directly affiliated with government departments, including China’s economic planning body (the National Development and Reform Commission), the Ministry of Ecology and Environment, and the Ministry of Transportation.

“They are described in the climate circle as the ‘national team,’” said Li Shuo, a senior climate officer at Greenpeace East Asia, referring to the research coalition behind the report. Tsinghua University, where Xie Zhenhua runs a climate institute (ICCSD), has been central to China’s climate policy decision-making, he added. (While the research was just made public, it began in 2019 and was completed before Xi’s announcement.)

So the recommendations from this high-level group of experts are not merely academic. Because of who’s backing it, “it will be considered very closely by leaders, and very likely played an important role in supporting President Xi’s 2060 carbon neutrality announcement,” said Alvin Lin, climate and energy policy director at the Natural Resources Defense Council in Beijing. (Disclosure: The author worked as a research fellow for NRDC in Beijing from 2016 to 2017.)

So what exactly does the study recommend and how might it influence China’s trajectory?

The new study contains many significant recommendations; key among them is the timeline for China’s decarbonization.

In his presentation of the results on Monday, He Jiankun, a Tsinghua professor and climate expert who co-led the study, said his understanding is that Xi’s goal of “carbon neutrality” by 2060 was referring to all greenhouse gases. An expert source told China Dialogue that this interpretation shouldn’t be understood as the official government stance until it is further clarified. But if official, it would mean China would have to cut emissions more rapidly over the coming decades.

The research also shows what net-zero emissions might look like for the world’s top emitter. Under their net-zero emissions scenario, the researchers propose almost entirely replacing fossil fuels with clean energy in the electricity sector, leaving coal power at less than 5 percent of power generation — a massive drop from the almost 70 percent coal supplied in 2019.

But totally phasing out all fossil fuel consumption would be very difficult, particularly in the industrial sector where coal is used to produce steel, cement, and other materials at high heat. So, to reach net-zero carbon emissions by 2050, China would cut these emissions from a projected peak of 10.5 billion tons to 1.7 billion tons by mid-century. To offset those remaining emissions, China would lean heavily on carbon sinks and negative emissions — methods of trapping and absorbing emissions.

The researchers suggest these emissions could be dealt with in a number of ways. Carbon would be captured at power plants and buried underground. Some power stations could reduce emissions by burning plants (which have themselves sequestered carbon growth) and burying the carbon dioxide released from the plant. The remaining half of emissions would be offset by planting trees (in itself a fraught approach to removing carbon from the atmosphere).

But relying on negative emissions is by no means a sure bet since many of the technologies have not yet been proven at scale. China does have a history of massive tree-planting campaigns, but it has only just started to develop facilities to capture carbon emissions from industry and power plants.

The study also doesn’t flesh out how China will get from net-zero carbon in 2050 to net-zero greenhouse gases in 2060, but it does vaguely refer to further use of carbon sinks and carbon dioxide removal technologies, such as removing carbon dioxide from the air (a process called direct air capture).

Will this plan help change China’s course over the next decade?

According to the plan, China’s radical decarbonization would not begin immediately.

The study laid out four decarbonization scenarios. The net-zero carbon scenario referred to above is called the 1.5 degrees Celsius scenario because it is in line with the global aim to keep global temperature rise below that level. Another scenario tracks the 2 degrees Celsius path, while two less ambitious scenarios are based on current policies and enhanced policies.

“Currently due to the inertia of the energy and economic systems, it is difficult to promptly carry out the 2 degrees Celsius and 1.5 degrees Celsius emissions reduction pathways,” He Jiankun said during his presentation.

Instead of immediately pursuing the most aggressive decarbonization path, the researchers recommend China take a less ambitious path until 2030, then quickly bring emissions in line with the 2 degrees Celsius and 1.5 degrees Celsius pathways. Following the 1.5 Celsius path, that would mean China would need to cut emissions by a breakneck pace of 8 to 10 percent a year, according to the study.

Would this approach just kick the can down the road? According to Chen Ji, a principal at the Rocky Mountain Institute in Beijing who has also studied China’s long-term decarbonization, this path doesn’t mean the researchers recommend putting off action until 2030. It means the coming decade would lay the groundwork for more rapid decarbonization.

“The rate of emissions reduction starting to increase after 2030 would actually be in response to China taking more forceful action from 2020 to 2030, but the result of these actions will be clearer after 2030,” he said.

However, some experts raised concerns about this approach. Even though the researchers think China could still get back on an emissions reduction path aligned with the Paris Agreement after 2030, leaving steeper emissions cuts until then will make decarbonization more challenging to pull off.

“Research on cost-optimized emissions reduction strategies suggests that a more linear path towards the 2060 target would be economically optimal (see e.g. IPCC special report on 1.5 degrees), not to mention more credible to the outside world,” wrote Lauri Myllyvirta, lead analyst at the Centre for Research on Energy and Clean Air (CREA), in Carbon Brief.

Shifting gears on decarbonization after 2030 might lead China to build more carbon-intensive infrastructure like coal-fired power plants over the next decade, making emissions reduction more challenging in the future, Greenpeace’s Li Shuo said.

But the “inertia” He Jiankun referred to is a real barrier for China to overcome in the coming years. For instance, China’s power sector still privileges coal over renewables by allocating hours to coal plants annually rather than allowing renewable energy to compete with coal plants in real time. Reforms to this system, which are underway, would help to boost renewable energy growth in the future.

Other challenges in the near term include developing a green hydrogen industry to replace fossil fuel use for heavy industry and transportation, according to Chen Ji. Helping millions of workers transition out of the coal, steel, and cement industries is also a looming quandary for China.

What to watch for in the coming year

Although this new study has strong backing from people with connections to the highest levels of government, its place in China’s official plans will be clearer when China submits its “mid-century strategy,” a document that all signatories of the Paris Agreement are requested to complete by the end of 2020 to chart out long-term decarbonization. (China is expected to release this document sometime in the next few months.)

As for more immediate decision-making, the study authors also recommend that China upgrade its climate and energy targets under the Paris Agreement and in its five-year plan. China’s carbon emissions are still growing — last year saw a 2 percent increase — so the authors advise that the next five-year plan set a hard cap on carbon emissions at 10.5 billion tons. As for setting new Paris Agreement targets this year, one key recommendation is to up the 2030 target from 20 percent non-fossil fuel energy generation to 25 percent to speed China’s renewable energy build-out.

Whether China adopts these upgraded targets in the coming months will be a first real indication of how and when the country plans to get to net zero.