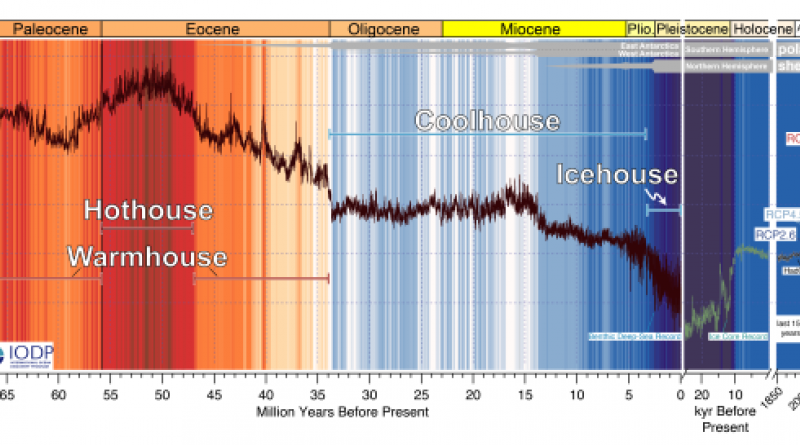 Record goes back to the dinosaur extinction.

Sixty-six million years ago, after a massive asteroid hit Earth with the explosive energy of roughly 1 billion nuclear bombs, a shroud of ash, dust and vaporized rock covered the sky and slowly rained down on the planet. As plant and animal species died en masse, tiny undersea amoebas called forams continued to reproduce, building sturdy shells out of calcium and other deep-sea minerals, just as they had for hundreds of millions of years. When each foram inevitably died — pulverized into seabed sediment — they kept a little piece of Earth's ancient history alive in their fossilized shells.

For decades, scientists have studied those shells, finding clues about the ancient Earth's ocean temperatures, its carbon budget and the composition of minerals spilling through the air and seas. Now, in a new study published today (Sept. 10) in the journal Science, researchers have analyzed the chemical elements in thousands of foram samples to build the most detailed climate record of Earth ever — and it reveals just how dire our current climate situation is.

The new paper, which comprises decades of deep-ocean drilling missions into a single record, details Earth's climate swings across the entire Cenozoic era — the 66 million-year period that began with the death of the dinosaurs and extends to the present epoch of human-induced climate change. The results show how Earth transitioned through four distinct climate states — dubbed the Warmhouse, Hothouse, Coolhouse and Icehouse states — in response to changes in the planet's orbit, greenhouse gas levels and the extent of polar ice sheets.

The zig-zagging chart (shown above) ends with a sobering peak. According to the researchers, the current pace of anthropogenic global warming far exceeds the natural climate fluctuations seen at any other point in the Cenozoic era, and has the potential to hyper-drive our planet out of a long icehouse phase into a searing hothouse state.

"Now that we have succeeded in capturing the natural climate variability, we can see that the projected anthropogenic warming will be much greater than that," study co-author James Zachos, professor of Earth and planetary sciences at the University of California, Santa Cruz, said in a statement. "The Intergovernmental Panel on Climate Change (IPCC) projections for 2300 in the 'business-as-usual' scenario will potentially bring global temperature to a level the planet has not seen in 50 million years." (The IPCC is a United Nations group that assesses the science, risks and impacts of climate change on the planet.)

To compile their new era-long climate map, the study authors examined fossil foram shells in deep-sea sediment cores — long tubes of rock, sediment and microbes — drilled from the world's oceans over the past several decades. Forams (short for foraminifera) are microscopic plankton whose oldest relatives appeared in the ocean close to a billion years ago; the deeper scientists dig into the seabed, the older the foram specimens they uncover.

The ratios of carbon and oxygen isotopes (versions of elements) in foram shells hold critical climate information. The ratio between the oxygen isotopes oxygen-18 and oxygen-16, for example, can reveal how warm the surrounding water was when a foram constructed its shell; the higher the ratio, the colder the water. The ratio between carbon-13 and carbon-12 shows how much organic carbon was available for the microbes to eat; here, a higher ratio correlates with more greenhouse gases (like carbon dioxide) in the atmosphere.

Because the team's climate record covers such an incredibly long time period, the researchers also had to consider astronomic impacts on the planet's climate — that is, how Earth's slowly changing orbit and tilt toward the sun impact the amount of sunlight reaching different parts of the planet at different times, also known as Milankovitch cycles. When the team overlaid orbital data with their isotopic climate data, they saw that orbital variations created distinct but relatively small-scale changes to the global climate. Crucially, each big jump between climate states was tied to a massive shift in greenhouse gas levels, the researchers said.

For example, about 10 million years after the dinosaur extinction, Earth jumped from a warmhouse state to a hothouse state. This event, known as the Paleocene-Eocene Thermal Maximum, saw temperatures up to 60 degrees Fahrenheit (16 degrees Celsius) above modern levels, Zachos said, and was driven by a massive release of carbon into the atmosphere, thought to be the result of huge volcanic eruptions in the North Atlantic. Similarly, as carbon dioxide disappeared from the atmosphere over the next 20 million years, ice sheets started to form in Antarctica and the planet entered a coolhouse phase, with surface temperatures averaging about 40 F (4 C) above modern levels.

About 3 million years ago, Earth entered an icehouse phase, driven by waxing and waning ice sheets in the Northern Hemisphere. Now, human greenhouse gas emissions are causing temperatures to rise to an extent not seen in tens of millions of years. This rise is well beyond the natural variations triggered by Earth's changing orbit, the researchers concluded. And if current greenhouse emissions hold steady, the climate could skyrocket back to levels not seen since the Paleocene-Eocene Thermal Maximum. The transition from icehouse to hothouse won't take millions of years, Zachos said — it will take hundreds.

"We now know more accurately when it was warmer or colder on the planet and have a better understanding of the underlying dynamics and the processes that drive them," lead study author Thomas Westerhold, Director of the University of Bremen Center for Marine Environmental Sciences in Germany, said in the statement. "The time from 66 [million] to 34 million years ago, when the planet was significantly warmer than it is today, is of particular interest, as it represents a parallel in the past to what future anthropogenic change could lead to."

Commentary: Climate change could be much worse than we are told.