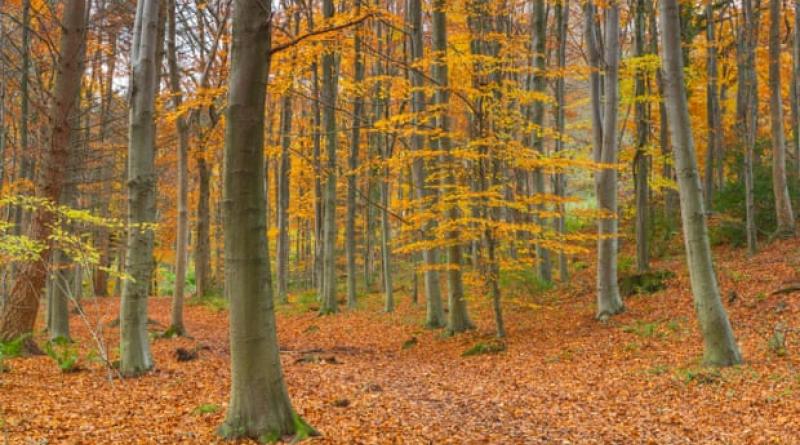 Report suggests tree growth will not store nearly as much carbon as scientists hoped.

Global heating appears to be making trees drop their leaves earlier, according to new research, confounding the idea that warmer temperatures delay the onset of autumn.

The finding is important because trees draw huge amounts of carbon dioxide from the air and therefore play a key role in managing the climate.

The rising temperatures also mean that spring is arriving earlier and, overall, the growing season for trees in the planet’s temperate zones is getting longer. However, the earlier autumns mean that significantly less carbon can be stored in trees than previously thought, providing less of a brake on global heating.

Scientists are still working out how large the effect is likely to be, but it might amount to 1bn tonnes of CO2 a year, which would be more than the annual emissions of Germany.

The new research is based on a huge dataset of observations of European trees, experiments that varied light and CO2 levels, and mathematical models. It showed that as well as temperature and day length, the amount of carbon a tree has absorbed in a season is a key factor in determining when it no longer needs its leaves and sheds them. The scientists liken the effect to a person becoming full after a heavy meal and being unable to eat more food.

Other recent research has shown that trees that grow rapidly have a shorter lifespan and that the climate crisis and the mass felling of trees has overall made their lifespans significantly shorter.

“For decades we’ve assumed that growing seasons are increasing and that the autumn leaf-off is getting later,” said Prof Thomas Crowther at ETH Zurich in Switzerland, who was one of the study team. “However, this research suggests that as tree productivity gets higher, the leaves actually fall earlier.”

Earlier models that did not include the amount of carbon a tree absorbs during a season indicated that autumn could be two to three weeks later by the end of the century on current emissions trends. But the scientists’ new model indicates autumn may actually come up to six days earlier. “So the increases [in carbon storage] will be nowhere near as great as what we expected,” said Crowther.

Christine Rollinson, an ecologist at the Morton Arboretum in Illinois, USA, who was not part of the study team, said the earlier models were known to be simplifications but were the best available.

“The big challenge is that autumn has always been a bit of a mess,” she said. “Depending on where you are and which species you’re looking at, there’s some evidence that leaf fall is happening earlier and some that it’s happening later. But understanding how well a tree grows during the season really helps explain that tree-to-tree variation.

“What is particularly amazing about the study is how it provides such different lines of evidence to reach the same conclusion,” she said. But she was cautious about the impact of earlier autumns on overall carbon storage: ”It’s really not clear yet how this is going to cascade down.”

Rollinson said it remained critical to cut emissions from fossil fuel burning and deforestation to tackle the climate emergency: “We can’t put all of the responsibility on to [growing] trees.”

The research, published in the journal Science, used more than 430,000 leaf fall observations from trees at 3,800 sites across central Europe from 1948 to 2015, as well as experiments and modelling.

Photosynthesis in leaves converts CO2 from the atmosphere into carbon compounds that the tree uses to live and grow. If the tree can no longer use the carbon, it stops maintaining its leaves and they fall.

It is not known what specific factor, or combination of factors, triggers this halt in growth, but it may be the availability of nitrogen. About 94% of deciduous trees cannot supply their own nitrogen, so the researchers think their findings are likely to apply to most trees in temperate zones around the world.

Estimates of how much the earlier autumn leaf fall will reduce the CO2 captured by trees, compared with previous models, is in progress. But it may be in the order of 1bn tonnes a year, the scientists said, based on earlier research.

How the climate is changing our trees.

Earlier springs could cause common bird species to become extinct by end of the century, scientists warn.