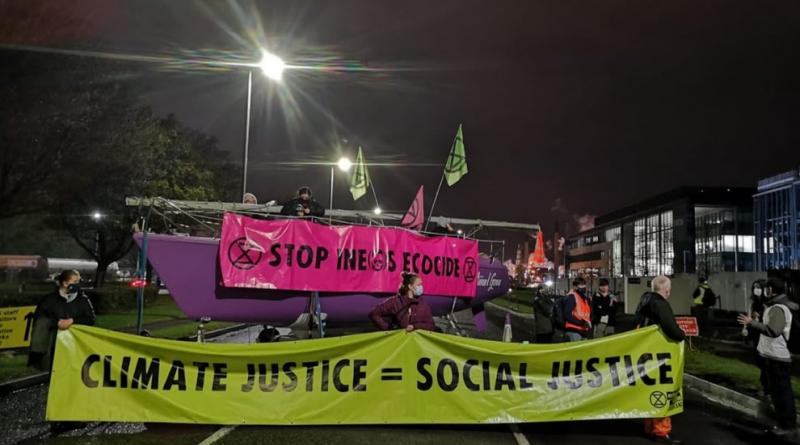 ‘We are here to expose the climate destruction that Ineos is causing,’ activists say.

Demonstrators working in groups of six have used two boats to block roads in an effort to prevent access to the plant.

The protesters have locked themselves together and they have parked a boat painted with the words: “Act Now: The future you fear is already here”, outside the facility.

Ineos’s Grangemouth site is the company’s largest manufacturing centre by volume of products, and home to Scotland’s only crude oil refinery and produces the bulk of fuels used in Scotland, according to the company’s website.

Extinction Rebellion Scotland said in a statement: “The UK and its fossil fuel driven economy continues to profit from the suffering of others. XR Scotland demands that any just transition away from fossil fuels also redresses injustices both internationally and historically.”

“The five oil, chemical and power plants owned by the company at Grangemouth spewed 3.2 million tonnes of carbon dioxide into the air during 2019.”

This month Sepa published the Scottish Pollution Release Inventory for 2019. The report details 47 pollutants released to the air from 1,327 industrial sites across the country.

The online report allows the public to find which facilities in Scotland produce the most pollutants.

Five Grangemouth facilities were among the top 10 biggest CO2 emitters. The Petroineos oil refinery was the second-highest emitter, while the Ineos-owned combined heat and power plant was fourth.

Annie Lane, from Glasgow, was taking part in the protest and said: “Ineos Grangemouth is Scotland's largest climate polluter. It is Scotland's only crude oil refinery. It also stores fracked gas from the US.

"Given the widely assumed ‘ban’ on fracking in Scotland, for fracked gas which harms communities worldwide to still be processed here is outrageously hypocritical. We are here to expose the climate destruction that Ineos is causing.”

Mark, a care worker from Glasgow who was also part of the protest at Grangemouth said: “I'm here today as an everyday citizen with Extinction Rebellion Scotland to highlight the fact that Ineos are Scotland's single biggest polluter driving climate change.

“Controversial fracked gas is imported from the US to be turned into plastics here at Grangemouth, and Ineos recently requested a £550m bailout of tax-payers money due to losses they claim Covid-19 restrictions caused, all while Jim Ratcliffe the majority owner and CEO of Ineos, the richest man, or third richest, depending on source, in the UK has recently changed his status to being domiciled in Monaco, a tax haven.”

A spokesperson for Ineos told The Independent: “Early in the morning, Extinction Rebellion blocked the entrances to Ineos’s office on Inchyra Road in Grangemouth. The group demands a transition away from fossil fuels.

“Ineos respects the right to peacefully protest in a responsible and safe manner, but notes that over the 10 years between 2009 and 2019, CO2 emissions from the Ineos Grangemouth site have reduced by 37 per cent and from the chemicals business by 43 per cent.”

“The site is operating normally.”

The firm added: “Ineos products are used in a wide range of every day and essential items, currently protecting front line healthcare professionals and their patients, whether through the use of PPE or the application of medicines to treat the effects of the pandemic and the development of antiviral drugs. The use of plastics has been invaluable during these unprecedented times.

“Our sites continue to explore ways to reduce our emissions.

“If our products (polymers, ethanol and ethylene) are no longer made in Scotland, then they will be manufactured elsewhere and transported to the country, adding significantly to the global emissions per tonne of product.”

For both protests, Extinction Rebellion said: “Covid-19 safety precautions are being taken, including face masks, social distancing, use of hand sanitiser, and participating activists are using a track and trace app.”