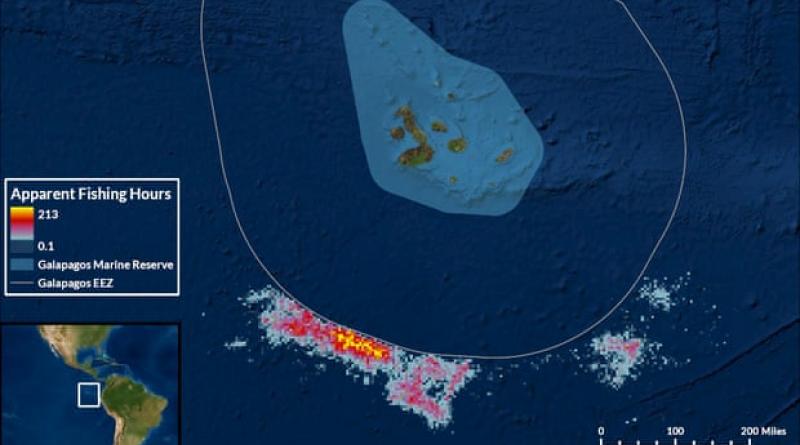 Hundreds of vessels caught logging 73,000 hours of fishing in just one month in new analysis.

A vast fishing armada of Chinese vessels just off the Galápagos Islands logged an astounding 73,000 hours of fishing during just one month as it pulled up thousands of tonnes of squid and fish, a new report based on data analysis has found.

The discovery of the giant flotilla off the archipelago that inspired Charles Darwin’s theory of evolution stirred controversy and outrage in Ecuador and abroad.

Nearly 300 Chinese vessels accounted for 99% of visible fishing just outside the archipelago’s waters between 13 July and 13 August this year, according to analysis by marine conservation group Oceana.

The fleet was fishing primarily for squid – essential to the diet of the unique Galápagos fur seals and endangered scalloped hammerhead sharks – as well as for commercial fish species such as tuna and billfish that contribute to the local economy, the report said.

“For a month, the world watched and wondered what China’s enormous fishing fleet was doing off the Galápagos Islands, but now we know,” said Marla Valentine, an illegal fishing and transparency analyst for Oceana.

China is ranked as the world’s worst nation in a 2019 IUU fishing index. Its fleet, by far the largest in the world, is regularly implicated in overfishing, targeting of endangered shark species, illegal intrusion of jurisdiction, false licensing and catch documentation, and forced labour.

“This massive and ongoing fishing effort of China’s fleet threatens the Galápagos Islands, the rare species that only call it home and everyone that depends on it for food and livelihoods,” Valentine said.

The Galápagos Marine Reserve is a Unesco world heritage site and covers more than 133,000 sq km around the archipelago. It is an oasis for ocean biodiversity with more than 20% of its marine species found nowhere else on earth.

“Sadly, this is just the tip of the iceberg when it comes to the impact of China’s huge distant-water fishing fleet on our oceans,” said Valentine.

“The situation playing out in the Galápagos should raise serious questions and concerns about the impact China’s massive fishing fleet is having on the oceans it sails.”