A change in the weather: new demand for TV presenters to include climate in forecasts. 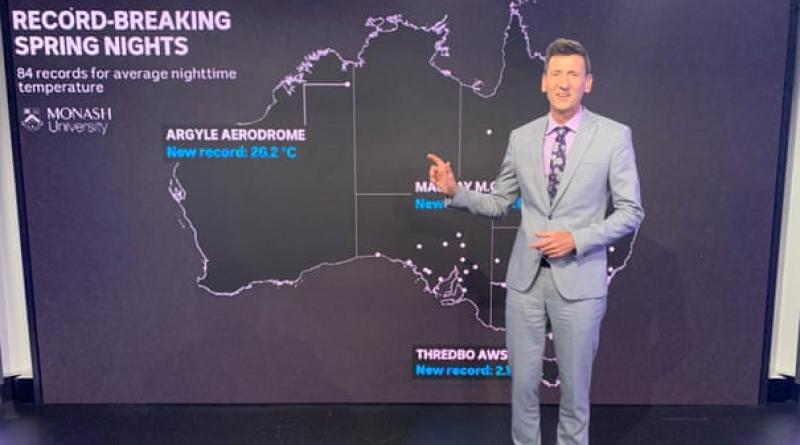 Graham Creed has spent 30 years with his head in synoptic charts, and for the past 20 he’s been on television letting Australians know if it’s going to be hot, cold, wet or dry.

But for the past two years, usually at the end of months with heatwaves and extreme temperatures, Creed has been adding extra information to his weather segments.

“I’ll look at what’s been happening particularly with temperature and the general trends in a warming climate,” says Creed, who does more than a dozen live weather bulletins a day on ABC television and radio in New South Wales and on the national broadcaster’s rolling news channel.

Given the rarified and often polarised nature of Australia’s national conversation on climate change, you might think introducing climate change into weather bulletins would see a flood of negative feedback.

“I’m surprised by how little there’s been,” says Creed, who says some people tell him on social media that it’s “about time” they heard about the changing climate from a weather presenter.

Creed is one of 17 Australian weather presenters using data and graphics on climate compiled by Monash Climate Communication Research Hub at Monash University.

“But when you drill down into people’s understanding of what climate change is, we find people’s knowledge doesn’t match their concern.”

When it comes to who people trust on climate change, he says research has found that climate scientists are highest on the list, followed by farmers and firefighters. Fourth are weather presenters.

“They have a magical combination,” says Holmes. “They are trusted, but they’re also skilled communicators and they have access to large audiences.

“We have been looking at ways to help build climate literacy in Australia. Weather presenters are on people’s screens night after night.”

So far, the information being given to weather presenters comes from the Bureau of Meteorology’s public data and has focused on rising temperature trends over the past 50 years.

Australia has warmed by 1.4C since reliable records started in 1910. The hottest year on record was 2019, and the number of days of extreme heat has risen sharply.

The trends and their chief cause – rising levels of greenhouse gases in the atmosphere – were laid out clearly in a report from the Bureau of Meteorology and CSIRO in November.

Understanding and quantifying the role that rising greenhouse gas emissions has on weather events is a fast-evolving scientific field known as climate attribution.

New research from the Bureau of Meteorology could give weather presenters such as Creed the ability to point to forecasted hot months or seasons and give the audience information about how human-caused climate change has influenced what they’re about to experience.

Holmes and Creed say it could be a game-changer in how the public understands the affects of climate change on their lives.

In a new scientific article, scientists from the bureau published details of a new method that has the ability to attribute the influence of climate change on some extreme weather events before they’ve even happened.

Published in the American Meteorological Society’s Journal of Climate, the article explained this was possible by looking at two sets of results from a model used to forecast coming months and seasons.

One model is allowed to run starting with real-world conditions – including the extra CO2 that is in the atmosphere because of human activity.

Another model runs parallel, but starts with conditions as they would have been without that human influence. Scientists then compare the two results.

“From that comparison, you can see the influence of climate change on the magnitude of the event,” says Monash University climate scientist Prof Julie Arblaster, a co-author on the paper.

“There’s the potential for this to be run in real-time. If you see a forecast that’s heading for a warm month, you could run the forecast before it even happens and get that information before the event is happening.

“Climate change and natural variability are always happening together, but we can ask if climate change made an event more likely or warmer than it would have been otherwise.”

In the research, the approach was used to look at the daily temperature extremes in a heatwave in Australia in October 2015, which remains that hottest October on record for the country. According to the research, climate change was directly responsible for about half of the above average heat that month – or about 0.9C.

The Guardian has asked for an interview with the bureau about the research, but the request has been twice declined.

“Firstly, it’s just that information that climate change is already happening and is influencing extreme temperatures.

“It’s important to talk about how much more [temperature extremes] are looking to increase in the next 20 or 30 years. Those unprecedented extreme conditions in 2019 and 2020 end up in 20 years’ time being almost normal.”

Both Creed and Holmes says the bureau’s work could represent a major breakthrough in the ability to communicate the affects of climate change to the general public.

Holmes says: “What this is doing is saying we can forecast how much of an upcoming event was due to greenhouse gases, and that’s a whole new level of attribution. I think it can be a game-changer.”

Creed spends much of his time in and around newsrooms, and he says by the time scientists have analysed extreme weather events for attribution studies, the news cycle has moved on.

So the potential to be able to refer to reliable information about the contribution of climate change to events as they happen “fills a big gap.”

“It’s phenomenal. The missing link has been us being able to say that this coming heatwave will be a degree warmer because of climate change.”

Has Creed seen the climate change since he started presenting the weather 20 years ago?

“Yes, the weather is changing,” he says. “Climate change used to be this big ethereal thing that was hard to understand. But we are now looking at the weather patterns changing.

“I think I should be talking about it.”