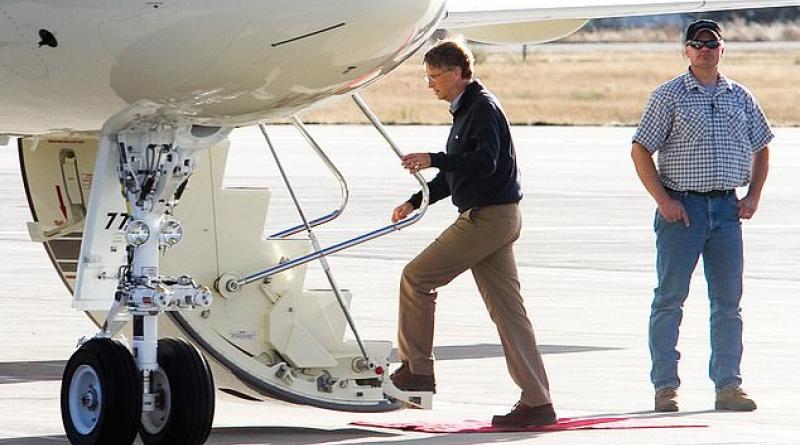 Bill Gates has been accused of hypocrisy after entering a bid to buy the world's largest private jet operator, just one month before he releases a book preaching about climate change.

Cascade and Blackstone are now going head-to-head with private equity firm Carlyle, which had already made an initial takeover approach.

Gates' Cascade already owns a 19 percent stake in Signature making it the firm favorite to win the bid.

But news of Gates' pursuit of the private jet firm has raised eyebrows given the company's actions are at direct odds with his very vocal stance on climate change.

It comes just one month before Gates releases his hotly-anticipated book, 'How to Avoid a Climate Disaster: The Solutions We Have and the Breakthroughs We Need', where he sets out his plans for how the world can reach zero greenhouse gas emissions in time to prevent a climate crisis.

It also comes just months after he published a blog post lecturing the public that climate change 'could be worse' than the coronavirus pandemic.

Signature Aviation handles 1.6 million private jet flights every year. And every single private jet flight emits up to 40 times as much carbon per passenger as a regular commercial flight, according to a 2019 report by aviation firm Honeywell Aerospace.

Several people were quick to point out the hypocrisy in Gates' latest business venture on social media Friday.

'Bill Gates, one of the most prominent climate change activists, has a big investment in a company that runs small airports for the mega-rich's private jets,' one person wrote.

'What does climate change have to do with flying around in private jets? Ask Bill.'

Another objected to being lectured by one of the world's richest men on climate change while he buys up jets and jet companies.

'Gates is consistent: 'We cannot get to zero emissions simply—or even mostly—by flying and driving less.' Still, it should be hard to demand action on climate change *and* promote private jets,' tweeted another.

Should Cascade win the bid for Signature, any deal is likely to still be in the works when Gates' book is released on February 16.

The book aims to educate people about the need to work toward net-zero emissions  and how individuals can help achieve this goal.

In the book's foreword, it states that Gates has spent a decade investigating the causes and effects of climate change.

In August, the billionaire philanthropist warned in a blog on his Gates Notes site that 'as awful as this pandemic is, climate change could be worse.'

'A global crisis has shocked the world. It is causing a tragic number of deaths, making people afraid to leave home, and leading to economic hardship not seen in many generations. Its effects are rippling across the world,' Gates wrote.

Obviously, I am talking about COVID-19. But in just a few decades, the same description will fit another global crisis: climate change.'

Then, in December, the billionaire released a plan he claimed for how the US can take the lead in the fight against climate change.

'[We] need to revolutionize the world's physical economy - and that will take, among other things, a dramatic infusion of ingenuity, funding, and focus from the federal government. No one else has the resources to drive the research we need,' he said.

His plan includes a $25 billion increase in spending on clean energy research while he hit out at the fact that Americans spend more on gasoline in a single month than the government spends on such research.

This isn't the first time Gates has been slammed for his double standards around the climate change agenda.

While Gates, who has four of his own private jets, has previously claimed 'I don't think there is anyone doing more' than himself on tackling climate change, he has also admitted his planes are his 'guilty pleasures'.

A 2019 study by Lund University in Sweden found that Gates had the biggest carbon footprint of a group of 10 celebrities known to frequent private jets.

Researchers estimated that he took a whopping 59 private jet flights in 2017, travelling 343,000 km and producing a staggering 1,600 tonnes of carbon dioxide.

By comparison, the average person produces around 10 tonnes of carbon dioxide each year.

Despite the perceived hypocrisy, Blackstone and Cascade are said to be in advanced talks with Signature about their proposal that involves a cash offer of 3.81 pounds per share.

The offer will be made through Brown Bidco Ltd, a newly incorporated company which will be 70 percent owned by Blackstone with Cascade holding the rest.

Signature said this was Blackstone's sixth proposal, after it first made a bid last February.

Cascade and Blackstone must announce a firm intention to make an offer or walk away by January 14.

The bid for the travel company comes as commercial airlines have somewhat grinded to a halt amid the pandemic, as borders shuttered, travel bans were issued and consumers were told to stay home.

But while major airlines have been hard hit and are struggling to stay afloat, private jet operators have fared better as wealthy passengers sidestep travel rules and jet off around the world.