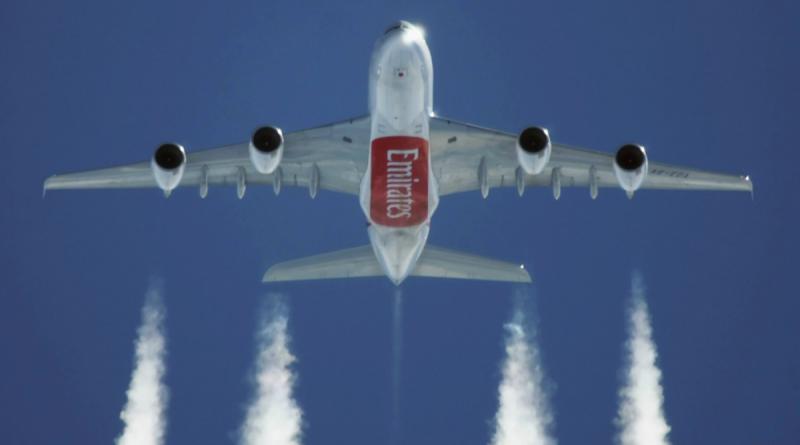 Air travel is not the only threat to life on earth, but it is a useful barometer of runaway economic growth and development that, if allowed to continue unmitigated, will irreparably harm the planet, writes Jonathan Gornall.

Jonathan Gornall is a British journalist, formerly with The Times, who has lived and worked in the Middle East and is now based in the UK. Gornall contributed this op-ed for the Syndication Bureau, an opinion and analysis article syndication service that focuses exclusively on the Middle East.

Last month, the European aerospace company, Airbus, predicted that over the next 20 years the number of commercial aircraft in operation around the world would double. Executives brushed off fears about the impact on climate change by insisting that the company was “a champion of bringing global emissions down.”

Since 1990, technological advances have indeed cut aircraft fuel consumption per passenger kilometer by half. But at the same time the number of passenger flights quadrupled, to 4.2 billion a year, utterly nullifying any gains in efficiency. By 2037 there will be more than 8 billion flights a year. The day after the Airbus announcement, a study by the International Council on Clean Transportation revealed that between 2013 and 2018 the volume of carbon dioxide emitted by airlines increased 32%. The figure is 70% worse than predicted by the UN and equivalent to firing up 50 new coal-burning power plants.

It was bad enough that Airbus presented a misleading picture of the aviation industry’s inability to match its exponential expansion with parallel improvements in fuel efficiency. But then Bob Lange, a senior vice-president at the company, had the audacity to present the disastrous projected explosion of air travel as a noble exercise in human rights. The growth, he said, was “largely coming from people who haven’t accessed air travel in the past [and] in the notion of what we’re going to do to protect our planet there has to be a notion of equity.”

The greatest demand for air travel will come from the rising middle classes in the developing world. Indeed, said Lange, even if US consumers halved their travel (which of course they won’t) “it’s not going to make a dent in [the numbers of] people travelling for the first time.”

So, to paraphrase the message from Airbus to the upwardly mobile of the developing world: “We in the developed world have driven the planet to the brink. Now it’s only fair that you should have the chance to emulate our profligacy and tip it over the edge.”

Air travel is not the only threat to life on earth, but it is a useful barometer of runaway economic growth and development that, if allowed to continue unmitigated, will irreparably harm the planet. The dilemma in which the world finds itself is summed up by two words that, given our current inability to slow global warming, have no business being in the same sentence: “sustainable” and “development.”

There were eight goals. They included eradicating hunger and poverty, reducing child mortality, achieving universal primary education, combatting deadly diseases such as HIV/Aids and malaria and promoting gender equality. In its end-of-term report in 2015, the UN celebrated the “profound achievements” that had been made in just about all these areas, but one headline result stood out. The number of people in the middle class – that growing, aspirant army of future airline-industry customers – had almost tripled between 1990 and 2015.

The flipside of that achievement was the significant downside of the Millennium Development Goals. Only one of the goals addressed environmental sustainability and here there was less to celebrate, including a 50% increase in global carbon dioxide emissions, the loss of millions of hectares of forests, drastic overexploitation of fish stocks and increasing water scarcity, which by 2015 was affecting 40% of people and is certain to increase as global development proceeds unchecked.

Fast-forward to the 15-year Sustainable Development Goals program, launched in 2015 with an even more ambitious collection of 17 targets. This time the buzzword is “integration,” a principle introduced in recognition of the reality that “action in one area will affect outcomes in others, and that development must balance social, economic and environmental sustainability.” What’s lacking, however, is any concrete guidance on how a continuous raising of living standards across the developing world can be achieved without delivering a fatal blow to our already half-hearted efforts to avoid environmental catastrophe.

Something, clearly, must be done to synchronize the goals of development and sustainability. No one can argue against the morality of reducing childhood mortality rates and lifting billions out of poverty. It is truly a very good thing, indeed. But doing so without simultaneously reducing our per capita reliance on fossil fuels is a recipe for disaster.

In 2005 demographers at the London School of Economics calculated that even a 40% reduction in carbon dioxide production in developed countries by 2050 would be cancelled out by population growth in the developing world – and the UN estimates that by 2050 the world’s population will have increased from about 7 billion today to close to 10 billion.

Meanwhile, the signs are everywhere that we are losing control of global warming. Just last month, the latest report from the Intergovernmental Panel on Climate Change (IPCC) concluded that while global sea levels rose by about 15 cm during the whole of the 20th century, they are now rising twice as fast, at a rate of 3.6 mm a year. Debra Roberts, co-chair of the IPCC working group, warned that the choices we make now are critical for our future. Global warming, she said, can be held in check only with “unprecedented transitions in all aspects of society, including energy, land and ecosystems, infrastructure [and] industry.”

For all our sakes, including the emerging middle classes in the developing world, who clearly deserve uplifts in their living standards to those of the developed world, we must hope that someone, somewhere, is listening. If they aren’t, then the world those new travelers are poised to visit in those fleets of shiny new aircraft simply won’t be worth having.