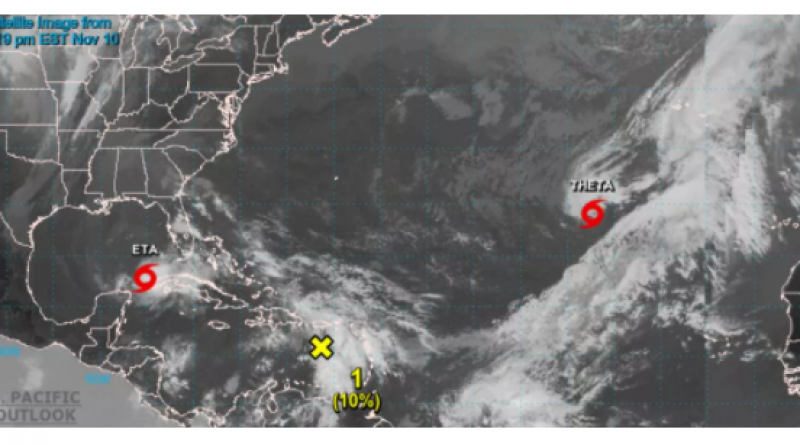 With the formation of tropical storm Theta, 2020 has now logged more tropical cyclones than ever recorded.

Theta is 2020's 29th named storm in the Atlantic Ocean. Theta, which doesn't pose a danger to land, formed a few hundred miles off the coast of Liberia Monday (Nov. 9), shattering the record for total number of named storms in the Atlantic hurricane season. (When a tropical cyclone's sustained winds reach 39 to 73 mph (63 to 118 km/h), it is considered a tropical storm and gets a name.)

The previous record for busiest hurricane season was 28, set in 2005 — the only other time in history that the National Hurricane Center has exhausted its list of Atlantic storm names and moved on to Greek letters. In 2005, the final storm didn't form until late December, so there's still plenty of time for 2020 to run up the score.

Climate change is making hurricanes more powerful and dangerous, on average, but it's not yet clear whether it's making them more common, according to Yale Climate Connections.

In the U.S., the Gulf of Mexico took the brunt of the beating from this Atlantic storm season. A record-breaking five named storms made landfall in Louisiana. The worst of these was Hurricane Laura in August, one of the most powerful storms ever to hit the state — arriving just after the weaker Tropical Storm Marco. After Laura left thousands homeless, three more storms made landfall along the Louisiana coastline and several more made landfall in the surrounding region before passing over Louisiana.

All told, the 2020 Atlantic season's death toll runs into the hundreds. Hurricane Laura alone killed 31 people in Haiti according to the Jamaica Observer and 28 in Louisiana, according to Fox 8. Hurricane Eta left 150 dead or missing in Guatemala, according to CBS News.

Powerful hurricanes aren't the only dramatic symptom of climate change to impact the U.S. this year. Wildfires turned the skies orange over the West Coast, forcing tens of thousands to evacuate across several states and killing dozens. And the Harvard School of Public Health says that climate change raises the risk of pandemics, and has helped spread insect-borne illnesses like Lyme disease.

The western Pacific has also had its share of dangerous tropical cyclones this year. Super Typhoon Goni, the strongest storm of the year according to CNN, hit the Philippines in early November.

2020 Hurricane Season Expected to Be Most Active Since 1980s