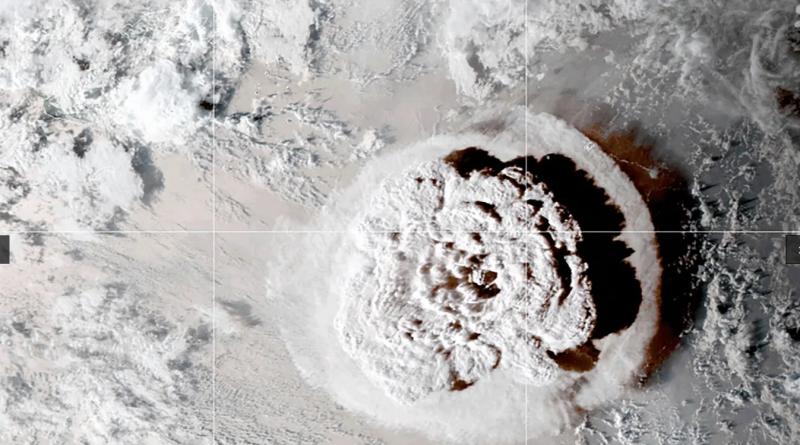 The full picture of devastation in the Pacific archipelago nation of Tonga is beginning to emerge after a huge underwater volcanic eruption this weekend.

Three of Tonga’s smaller islands suffered severe damage from tsunami waves and communications remain limited after the eruption, around 40 miles north of the capital Nuku’alofa.

Three deaths have been reported — two local residents and a British woman — although officials warn the toll is expected to rise as more reports come in from outlying areas.

Around an inch of volcanic ash has transformed the main island of Tongatapu into a gray moonscape, contaminating the rainwater that people normally rely on to drink, and preventing planes from landing at the main airport with much-needed supplies.

Satellite images captured the spectacular eruption of the Hunga Tonga Hunga Ha’apai volcano, with a plume of ash, steam and gas mushrooming above the South Pacific. The sonic boom was heard as far away as Alaska.

The plume rose into the air more than 19 miles but the eruption was relatively short, lasting only about 10 minutes, unlike some big eruptions that can continue for hours and even days.

However it led to tsunami alerts in Japan, Hawaii, Alaska and the US West Coast.

The US Geological Survey estimated the eruption caused the equivalent of a magnitude 5.8 earthquake. Scientists said tsunamis generated by volcanoes rather than earthquakes are relatively rare.

The tsunami waves caused damage to boats as far away as New Zealand and Santa Cruz, California, but did not appear to cause any widespread damage.

The Tonga Meteorological Services said a tsunami warning was declared for all of the archipelago, and data from the Pacific tsunami center said waves of nearly three feet were detected.

Shane Cronin, a volcanology professor at the University of Auckland, said the power of the eruption of the Hunga Tonga volcano, its largest since 1100AD, ranks among the world’s biggest over the past 30 years.

The height of the plume of ash, steam and gas was comparable with the huge 1991 eruption of Mount Pinatubo in the Philippines, which killed several hundred people.

“The very large eruption of 15 January 2022 is remarkable due to the rapid lateral expansion of the eruption cloud (seen in satellite images), coupled with tsunami and atmospheric shockwaves,” he said.

He added: “The eruption is likely to result in significant ash fall (cm to ten cm) in Tongatapu as well as the Ha’apai group of islands. Help will be needed to restore drinking water supplies. People of Tonga must also remain vigilant for further eruptions and especially tsunami with short notice and should avoid low lying areas.”

The Pinatubo eruption pumped so much sulfur dioxide (SO2) into upper atmosphere that scientists found that it had an impact on the Earth’s climate, causing a cooling effect which lasted for about two years.

SO2, a colorless, foul-smelling, toxic gas, is the natural byproduct of volcanoes and can create secondary pollutants once released into the air, including sulfate aerosols, particulate matter, and acid rain.

Yet this seems unlikely to be the case with the Tonga blast. Scientists estimate that Saturday’s eruption released 400,000 metric tonnes of SO2 into the atmosphere –- about 2 per cent of the Pinatubo eruption.

Initial satellite measurements indicated the amount of SO2 released would only have a tiny effect of perhaps 0.01 degree Celsius (0.02 Fahrenheit) global average cooling, Alan Robock, a professor at Rutgers University, told the Associated Press.

While there may be limited impacts on the climate crisis, scientists warn that there could be environmental repercussions from the underwater eruption including damage to coral reefs and fisheries, and coastline erosion.

Associated Press contributed to this report